When last we left the cardigan, I was still mad at it.

Darn you sweater for making me run out of yarn and lose my place in the chart.  Oh, and make mistakes, that made me rip out, and back and . . . whatever, I’m mad at you, into the closet you go.  I’m seriously considering ripping the whole thing out and making the sweater I originally planned to make, Dirty Martini, but Baby Cocktails.

And then I made the mitts.  But, still mad at the cardigan, I was looking to be distracted, and you know, email can do that to you.  I received an email from my LYS, suggesting I knit this, Boardwalk by Heidi Kirrmaier, from Wool People 3. 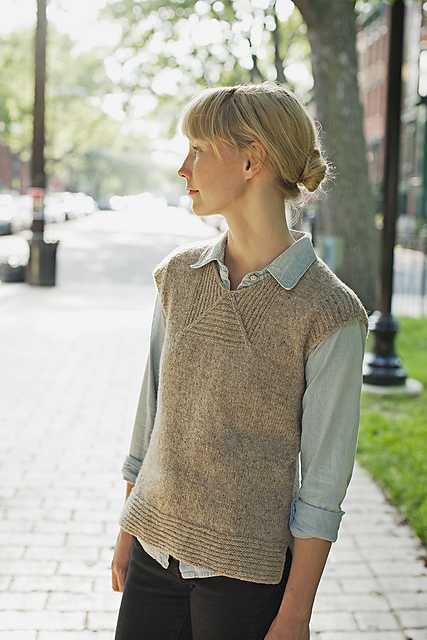 I just love those little cap sleeves.  The true color is a bit more purple than above, but I’m in my office, and I’m not going to get a shot of the true color.  I just have to finish up the mitered neck placate and block it up, and it’ll be done!  And, we finally have the perfect weather for it.

On the reading front, I just finished Bill Clegg’s Did You Ever Have a Family?

When this book was long listed for the National Book Award and the Man Booker Prize last year I poo poo’d it – why on earth would I ever want to read something so incredibly depressing?  The premise is that a woman loses her family in a house fire on the eve of her daughter’s wedding.  Not a spoiler – it’s the springboard for this really lovely meditation on what it means to have a family, about love, and loyalty, choices, and legacy.  It’s about forgiveness and connections, compassion and humanity.  I really enjoyed it; it’s not often a novel can move me to tears, but this one did, and in a wholly genuine way, unlike last year’s other manipulative tearjerker, A Little Life.

And now, I’m reading Bruce Springsteen’s “heart-stopping, pants-dropping, race-riot-creating, oddball-hating, soul-shaking, love and fear making, heartbreaking” autobiography, and so far, which is not so far, just a couple of chapters, it’s just like going to one of his concerts – he brings you into his stories, mesmerizes you, and leaves you wanting more.  Some sentences read like pure poetry, others kind of go clankety clank, but it’s all very real, just like he is.

So, that’s it for this week!  Knit on and knit well, my friends!