I’d say “my it’s been a long time,” but that’s how this blog has gone for years, I suppose.  I’ve picked a word for 2017, and I’ll talk about that later this week (yep, really, I will!), but an element of my word is consistency, so I’m going to come up with a plan for being more consistent here in this little space of mine.  Perhaps I’ll sit down on Sunday and write a bunch of short posts I schedule to publish throughout the week, or maybe I’ll commit (hint hint) to blogging twice a week.  I’m not sure yet, I’m still figuring it all out, but I do know that I don’t want to ditch the whole thing, so I’ll come up with something.

So, this week I’m going to do a series of catch up posts, just a little this and that before the new year.  First up, knitting!

In my knitting world, I finished the gigantic sweater I knit for my husband (a sweater for a 6’4″ guy is necessarily going to be gigantic, so I knew what I was getting into, but it still didn’t make it any less of a, cough, cough, slog – miles and miles of stockinette.  I’d show you a photo, but I haven’t actually taken a picture of it yet – which is strange, because he’s already worn it a couple of times, and it is his favorite of the three sweaters I’ve knit for him.  And, that, in and of itself, was a lesson learning thing.  The first two sweaters I knit for him were lovely – last year’s sweater was Guston in Brooklyn Tweed’s Shelter, and a few years before that, Brooklyn Tweed’s Cobblestone, in Katmandu Aran.  Both sweaters, two me, were fab – texture and tweedy yarn.  Joe, however, really doesn’t like anything that isn’t structured, and he likes a smooth yarn, rather than a tweed.  So, this year, I let him pick the pattern (sort of, he described what he wanted, and I found it), and I let him pick the yarn.  And, now he has his fitted neck, saddle shoulder, ribbed sweater that he always wanted, Churchmouse Yarn’s Saddle Shoulder Pullover.  This pattern was frankly ridiculously expensive, but it got the job done.  My one problem was that rather than the instructions being in inches (like knit until armhole is x inches), it was knit 97 rows, or whatever.  This was done intentionally, as there’s a whole section on getting gauge, including row gauge, as well as how to add length here and there, to get a better fit.  I’m just not all that concerned with row gauge, and I like my instructions in inches.  Because I’m a lazy counter, I had to do some fudging sewing the saddle and the sleeve into place, because I didn’t have quite the same number of rows where they were supposed to be, but you would never know from looking at it, and all is good.

On the selfish knitting front, you may remember this:

This is Islay, from I think Gudrun Johnson.  I abandoned Islay because I a. ran out of yarn, and had to order more and b. it was time to knit giganto husband sweater.  When I picked it up again, I didn’t remember where I was, and of course, I hadn’t written it down.  I couldn’t figure it out, didn’t love it, decided to part ways with it, and knit something else.  So, I decided I wanted to knit this with my precious Miss Babs, Baby Cocktails’ Dirty Martini: 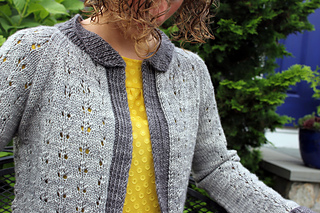 You would think this would be an easy color to find a contrast – grey, maybe.  But, I tried at least a half a dozen colors, yes, I actually swatched, and hated them all.  Meh.  So, I abandoned that idea (although I still want to knit this cardigan), and waited for something to come to me.

And, what came to me, ironically enough, was the Inspired by Islay Club from Kate Davies.  Back to the Hebrides!  I signed up for the club around Thanksgiving, but the first pattern didn’t come out until the second week in December.  I couldn’t wait, and I cast on Kate’s Braid Hills, not part of the club, but still a Hebredian inspiration: 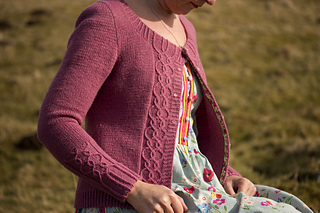 Perfect right?  So, here’s mine, just about the same place I ripped out the other Islay:

Anyway, no offense to the first Islay, but I’m so much happier with this version of my Miss Babs.  And, this is actually a pretty good representation of the color, as opposed to the grayer photo above – it’s a really beautiful, vibrant blue green.

I have long been a Kate Davies fan.  I’ve knit Paper Dolls, and her owls sweater, and I’ve admired her yokes and her haps.  I even have a fan girl photo:

That’s Kate and I in 2009 when she visited Philadelphia.  Of course, I look at that photo, and I see how thin I was, and think, “oh my, how did I get from there to here,” but that’s a post for another day.

Digression over.  Of course, now I’m midknit while the Inspired by Islay patterns roll out – 12 patterns over 12 weeks, and 12 newsletters filled with the most gorgeous photos of Scotland, and little history lessons to accompany each pattern.  The patterns come out on Wednesday, the newsletter on Fridays.  The newsletters also include Kate’s husband Tom’s whiskey reviews and recommendations.  Not only am I inspired to knit Islay inspired patterns, I am totally inspired to visit Scotland, and stay in a caravan and stare out over the lochs, and climb the foothills in my Islay inspired socks.  Not only do you get the 12 patterns and 12 newsletters for $36, you also get a discount code for Kate’s yarn, Buachaille.  So, for $3 a pattern, free whiskey advice and dream inspiring photos, and a coupon for  Scottish yarn, it is completely worth it.  There’s also a nice Ravelry group as well, but you can join the group without joining the club. 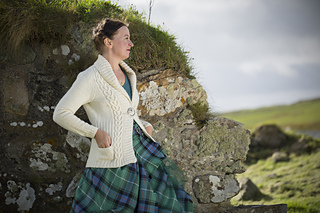 I think this is the pattern that I’ll order my Buachaille for – although I’m going to wait for all 12 patterns to come out before I decide.  I love the heart shaped cables, the shawl collar, and the ribbed waistline.  I’m thinking I’ll forego the pockets though.  So, this might just be the Winter of Islay, which shall hopefully not be my winter of discontent.  In any event, if you are at all a Kate Davies fan, you should definitely check out the club – it’s a bargain, it’s delightful, and it’s inspiring.

Tomorrow, a crochet catch up, and another club!