I am a machine.  A crochet machine.

I just keep cranking out round after round after round.  Very relaxing.  I have no idea where I’m supposed to be in the CAL, but I think I’m working at a good, steady pace – on pace to run out of yarn, again.  And that’s not to say that I’m not checking in on the CAL, and looking at everyone’s pretty pictures.  I am, and Polly has a really nice intro video every week highlighting some challenging parts of the pattern, it’s just that it’s a pretty relaxed CAL, everyone is working steadily, and I seem to be about where everyone is.  I’m just not on a timer – like the Ravellenics Hippo.  And, since it’s not a mystery, I don’t have to wait for the next part of the pattern to come out.

I should finish the tiles without any yarn shortages, and then I’ll have to wait for a replenishment shipment to start the connecting squares and corner triangles.  But, it’s all good.  As you can see, I have plenty of ends to weave in, uch, and I also have my knitting to go back to, since my Miss Babs was a perfect match.  Plenty to do while I wait!

On the reading front, I downloaded a mystery from the library, thinking that since I was next up in the library queue for Dark Matter, I just had a bit of time to kill.  But, I’ve been next in the queue for about a month now – I think the Dark Matter borrower must have turned off their WiFi to get the book finished, because it should have been returned by now – drat!  Anyway, so I’m not reading that planned next up book, I’m reading Elizabeth George’s A Banquet of Consequences. 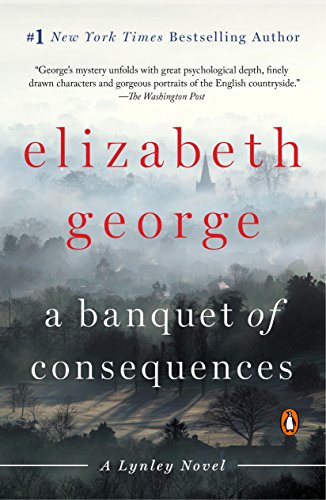 It’s 19th in the Inspector Lynley series, which of course I didn’t know when I downloaded it.  I have not read the previous 18, and I usually don’t like to start a series in the middle (or at the end, as the case may be), but oh well.  So far, I haven’t encountered any historical nugget that harkens back to anything other than the ramifications of the last book on one of his fellow detectives. I’m not that far into it, it’s ok, but I just love the title.  There was a prosecutor in Pennsylvania who recently died who always closed with the defendant now sitting at the feast that he had prepared for himself – and I when I saw “banquet of consequences” I thought what a better turn of phrase.  If I were a prosecutor, I’d definitely use it – but as a defense attorney, it doesn’t quite fit.

Speaking of defense attorneys, as some of you may know, I’ve been a public defender for 20 years.  I just finished watching HBO’s The Night of, and once again, I am just horrified by the portrayal of the woman defense attorney.  Just like that show on Lifetime, where they had the Innocence Project woman lawyer taking her top off on death row to impress a client, and later hooking up with a client to kill another suspect, this defense attorney, Chandra, falls for her client, and does beyond belief things.  Why? Why? Why?  Why can’t women defense attorneys be portrayed like their male counterparts, and not sexualize their clients?  I go to work, and I’m a professional – I treat my client’s the same way the male character on the show, the John Turturro character, treats his clients – with humanity, but not anything else.  I don’t even worry about crossing the line – because the line is so far off on the horizon it’s unimaginable.  At least the show’s one fantastic lawyer, the prosecutor, is a woman, so at least there was that.  So, just my two cents.

Thanks for stopping by!