Yarning Along – One Success and One Big Time Fail

Hello knitters! Long time no see. But I have been knitting! Pretty diligently too. And, as with all things that rely on the law of averages, I have one success to report, and sadly one fail – one sad, pathetic fail.

But, the good news first. Remember that Miss Babs I bought at Maryland Sheep & Wool? Maybe you do, maybe you don’t – but here it is! Just like I said it would be – as a finished Wickerwork!  Look how pretty that yoke is!

Wickerwork is by Gudrun Johnston, aka the Shetland Trader, and was published in Twist Collective sometime last year.  Have I mentioned how much I love Twist? Each pattern is a separate PDF, which means that when the powers that be edit a pattern, there’s no concern about leaving space for ads, or the next pattern, or more ads – the only concern is about making the pattern readily understandable to the average knitter.  I don’t mean there aren’t pattern repeats designated with asterix, or that there aren’t our familiar knitterly abbreviations.  I just mean that huge chunks of necessary explanations aren’t condensed into incomprehensible run on sentences in order to save column inches.   Every Twist pattern I’ve ever bought is easy to follow, and edited with the knitter in mind.  And that’s not to say they’re easy patterns, or beginner patterns.  Some are, but the patterns for advanced knitters are written in a way that you don’t need a Rosetta stone to translate them.

Unlike the latest issue of Interweave Knits.

And, here I present the fail.

Look at that ridiculous pyramid yoke – it’s supposed to be a yoke – a circle, not a triangle!!  And you know what, that’s not my fail, pattern – that’s your fail!  Yep, that’s right – I’m calling you out, pattern.  Pattern fail, not knitter fail.

That, above is supposed to be the entire upper yoke of a sweater for my 6’4″ husband.

Ok, let me back up.  After knitting myself a sweater, and numerous shawls and what nots, I decided that it was time to knit my husband a sweater.  This is a big undertaking in every sense of the project.  My husband is 6’4″ – that’s a lot of yarn – so it’s a big purchase.  My husband is very sensitive to the itchies, and is really picky about the fabric he wears.  He’s the one that checks the thread count when we buy sheets.  So, it’s a big, expensive purchase – no cheap yarn for him.  And then there’s the actual knitting – knitting a sweater for that tall a guy doesn’t just mean the torso is long – it’s also the arms.   The sleeves are endless.  And, of course, there are two of them.  So, it’s a big time commitment.

When I saw the Fall issue of the Interweave Knits, I was immediately drawn to this: 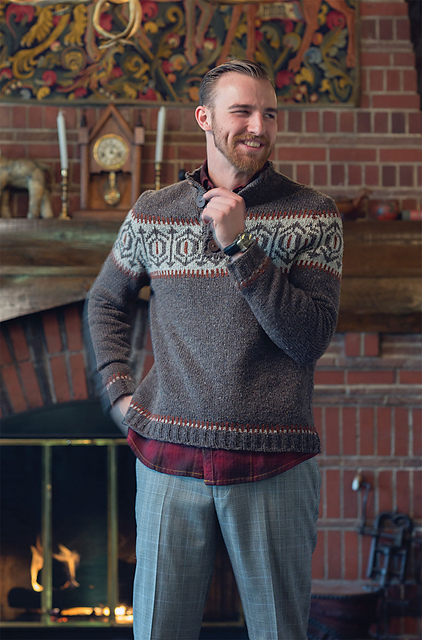 The Gunnislake Pullover, by the new editor of Interweave Knits.  I liked that it was rugged, and that it was knit in Brooklyn Tweed’s Shelter.  I liked that the sleeves were set in sleeves, and I liked the placket – I thought it would give my pretty broad husband extra room.

So, I bought the digital pattern through Zinio Magazines.  First mistake.  I don’t know if it’s the case if you buy the digital magazine straight from Interweave, but through Zinio, it is impossible to zoom in on the instructions without the pages flipping to the back of the magazine.  Also, the magazine isn’t a pdf, so it can’t be opened in ibooks, nor can it be converted to my fav, KnitCompanion.  If you are very careful, and zoom only slightly, the magazine won’t flip pages, but it’s a real pain in the butt.

After buying the magazine, I made a huge dent in my yarn allowance for probably about three months, and bought 14 balls of Shelter in the main color, and then two balls of the white contrast, and one of the red.   Because I wanted the same dye lot, my yarn store had to order it for me, and I waited two weeks for it to come in.  Then, there it was – and I cast on.  The first time I cast on, my gauge was ridiculously off – I’m a wishful thinking swatcher. But for the second go, I had Knittyd check it for me, and I was good to go.  And, just to be sure it was going to be big enough, I cast on the largest size, thinking it’s never bad, with a sweater like that, to have a bit of extra room.

And then, I started knitting.  To get started, you need to read through the entire first part of the pattern to get going and because of the way it’s written, you need to read it a few times, and a few times more, because it is edited to the nth degree to ensure that it only fit into one tiny column in the magazine.  Because of the way she did her increases – in the sleeve, and in the front, and at different rates, I had to set up a columned chart to check off the increases as I did them, and to ensure that I was on the correct row.  Ok, done. Then, it was time to start the color work – and frankly, it really didn’t look right at the get go. I put my stitches on waste yarn, and held it up to my husband – it seemed to just fit.  I figured, with the increasing in the yoke, it’s going to grow, I’ll keep going.  So, then I started the sleevecap increases, and the color work, and the  . . . nope – no chest or back increases.  Just increasing in the sleeve.  Who is this sweater for, I thought, a beanpole.  And, the increases were every other row.  Can you picture it – no increases in the front, no increases in the back, and a triangle growing at each sleeve –  totally pushing the neck up in the back – and the whole thing started to grow like a pyramid.  See photo above.

On top of the crazy increases, the colorwork repeat was squished into one chart, with different arrows for starting the front, sleeve, and back, for each size with no accounting for the increased stitches – just work them into the pattern, it said.  I think that if she had actually charted the increases, with the stitches, visually, she would have seen that this wasn’t working in the larger sizes, which had a different rate of increase than the sample that was knit, and that the model is wearing.

So, I took it off the needles again, as you see above, and I couldn’t even get it over Joe’s head its so ridiculously shaped.  So, I said fey, and threw it aside, never to be touched again.

But, I did have all of that yarn I invested in – big time investment.  Luckily, there’s a lot of pattern support for Shelter, and I went with this pattern from the ever reliable Ann Budd: 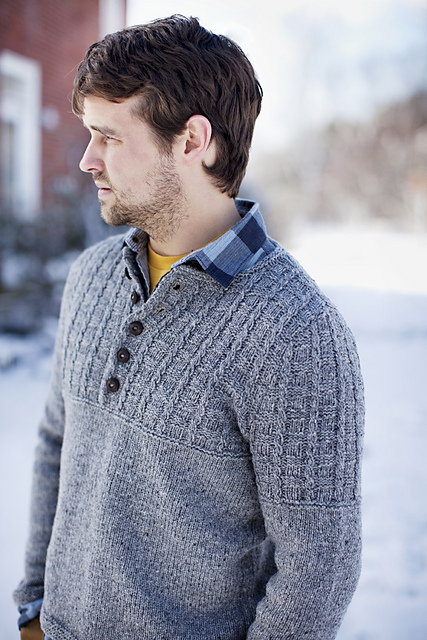 I know Ann Budd’s work, and I know the pattern is going to be correct.

But, I can tell you, it’s going to be a long time before I buy an Interweave Knits again.

So, what am I reading.  Like much of the reading universe, I just closed the book on The Nightingale, by Kristen Hannah.

For the first about 150 pages, I just really didn’t see what all the fuss was about, but then all of a sudden, the book was on fire, and I couldn’t put it down.  And, at the end, although I hate to admit it, my eyes were definitely wet, and as I finished it right before bed, I think my pillow may have gotten a little soggy.  Loved this book, truly.

And now, on the recommendation of a friend at work, I’m reading this:

I’m not very far in – but I have to say, it’s strangely charming so far.

So, hope everyone had a great summer, and I am totally excited that fall knitting is well underway!