So, here it is – I’m going to type it quick, and then just move on – my father died while my parents were vacationing in Mexico.  It took ten days for the Mexican authorities to send him back (in a crazy Fiesta casket decorated with blingedy bling), and then we buried him on a snowy, cold day midJanuary in his Hawaiin shirt, because all he had packed were vacation clothes.  Life has changed drastically for my 75 year old mother (they were married 51 years), and in turn, for me as well.  While I am a far far far cry from her caretaker, she’s strong, financially sound, and her mind is good, I’m much more involved, and for someone who used to talk to their mother once a week, who now talks to her once and twice a day, well, life is different.

And, while we have thawed out from this cold cold winter, I’ve been doing some very easy, stressless crafting.  Here’s the run down –

I’ve been knitting.  The week before my father died (or was it the same week? I forget), I started Ysolda’s knit-a-long Follow Your Arrow 2. 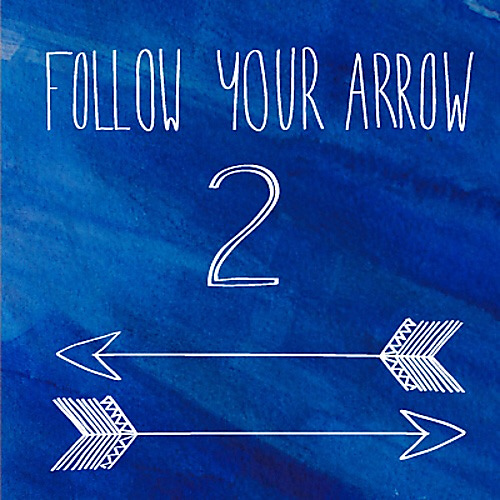 At the same time, I was finishing up a Mystery KAL from the year before, Bonnie’s Wish – 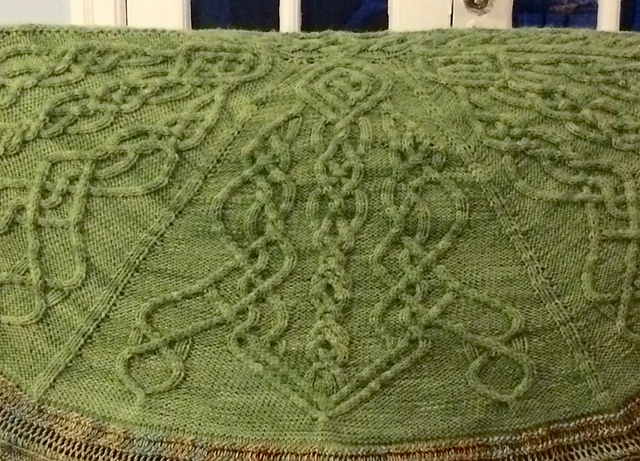 This project was almost a disaster, because, through no fault of my own (pattern fail, not Wendy fail – everyone ran out of yarn), I ran out of the center yarn.  I switched to the variegated, which was a risk, I’ll admit, but it all worked out, and I’m pleased.

Anyway, it was nice to have these one chunk at a time projects – not too taxing.  I finished, I think, maybe two weeks behind, not so bad!

Now, I’m knitting something super simple – just a round and round cowl.  Mindless.

I am also crocheting.

You may remember, I took a class on Craftsy, and taught myself how to crochet.  I made a gazillion amigurumi for the nieces and nephews.  And then I froze, as in Frozen – I got a request to make an Anna doll.  And then another, and then another.  I ended up making three.  I’m never making another again.  This is the last one.

Doesn’t she look happy?? About as happy as I was to be making another one. The first two were made with safety eyes, and I didn’t attempt embroidering a face. This one, I was out of safety eyes, so I thought, easy peasy. Peasy pleasey wrongy. Because I couldn’t draw on the yarn, I was winging it, eyeballing it (har har) – and everything was so crooked. But, it was really hard to rip the embroidery thread out of the thick polyester yarn. But, she’s done, and she’s gifted, and she’s gone.

These little guys were a cinch and a pleasure to make:

These are the bugs of Camp Kesem. Knitty D is on the board of directors of Camp Kesem, a camp for kids whose parents have cancer. Their mascot is a caterpillar. Knitty D asked me to make a caterpillar for their annual silent auction to benefit the camp. So, I bought the pattern for the caterpillar, and it came in a bug mini-ebook. So, I thought, what the heck – camp is overrun by bugs, right? And the bugs were born.

But, wait – I’m not done with the crochet. For some reason, I had convinced myself that I could do more than single/double crochet in the round and make bug bodies, I could crochet anything. So, I signed up for the free Crochet-a-Long, Sophie’s Universe, nevermind that I had to learn almost all of the stitches via youtube.  But, eh, that’s what youtubes for, right?  So, here’s up to part 6 of the CAL:

The biggest mistake I’ve made so far was buying the yarn online. Generally, unless I’m super familiar with a yarn and its color family, I won’t buy online. But, to get enough yarn – wool yarn – to make a blanket, the only affordable way is to buy online. I went with Webs Northampton. I have no problem with the yarn, love the yarn. I just hate some of the colors, like that periwinkel blue. Oh well. I’m carrying on – it’ll be whatever it will be. Ce sera sera. The dogs will always like it, right dogs?

The dogs are totally into the couch crafting thing.

Unfortunately for Lemon and Olive, the last bit of crafting hasn’t been on the couch, it’s been in front of the sewing machine.

Finally, I’ve been doing some sewing.

At the end of December, the Crafty Gemini posted that she was starting a quilt club, and she had a really super cheap introductory price going on. I follow Vanessa, the Crafty Gemini, on youtube, but I wasn’t a disciple. But, I thought, she’s fun, I think she’s going to be make a fun group. And, I was right. This is the best online crafting group experience I’ve ever had.  Every month there’s a monthly project, a Mystery Quilt block clue, a swap, four live web chats (sometimes with additional projects), a very active Facebook group (that you can join even if you’re not a member of the club), interviews with “famous” quilters, and giveaways.  And these aren’t just any giveaways – these are crazy good giveaways – the first month she gave away a sewing machine.  This month she’s giving away a bunch of really sweet fat quarter bundles.  Anyway, I’ve really been enjoying it, there’s a real sense of community, and through the swaps, I’m actually getting to know some people.  So, here’s what I made,

In January, the project of the month was a quillow – a quilt that tucks into itself into a pillow:

And, that month, we swapped mug rugs, with a sweets theme. My mug rug partner was a professional seamstress in Nova Scotia, so I was intimidated. But, she’s been so helpful, and supportive – since we were matched up the day before my father died – it was an awesome swap. This is what I sent her –

Of course, I haven’t taken a photo of what she sent me – a perfectly stitched mug rug with a lolipop, and the best ever mittens that were sewn from recycled sweaters. They were a lifesaver this winter.

In February, we swapped zippered pouches – here’s the front of the pouch I made –

and the back, along with a crocheted chihuahua, because I knew that my swap partner had three –

And here’s the pouch I received in return, along with a few sewing goodies,

While we were swapping pouches, we were making tote bags as the project of the month:

and this month, we’re making wallets, so I used the leftover fabric from the tote to make a matching one –

Not quite done – just got my snaps in the mail yesterday, so I’ll finish it up this weekend.

And, not quilt club related, but inspired by all of the sewing, I made myself a sheepy zip pouch for my knitting –

and, I cut up my Craftsy Mystery Box to make an Anna Maria Horner Color Dive quilt, tutorial on Creativebug:

And, that’s how I’ve been keeping myself busy!

And, now that I’ve broken the blog block, I’ll try to keep myself busy here as well.